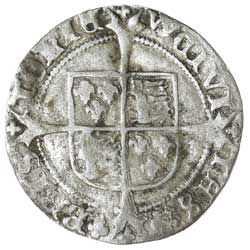 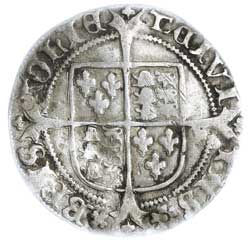 HENRY VIII, posthumous silver groat, (2.51 g), a mule of two reverses struck during the reign of Edward VI, from the Bristol mint, (S.2406/2407), one side with normal reverse with WS at start of reverse legend, the other side with normal reverse with TC at the start of the reverse legend, both include a rosette and crosses in legend and in the forks. Very fine, unique and previously unpublished.

This mule was probably made at the mint at the transition of the issues between William Sharington (appointed as under-treasurer in April 1546 and removed in December 1548) and Thomas Chamberlain (appointed as chairman of the commission in January 1549 to sequestrate Sharington's property for various currency offences). Chamberlain was appointed to be in charge of the mint at this time, meanwhile Sharington was sent to the tower, but released after a heavy fine. This issue was apparently produced early in 1549. The coinage weight for groats from 1544 - 1551 was set at 40 grains or 2.59 g.