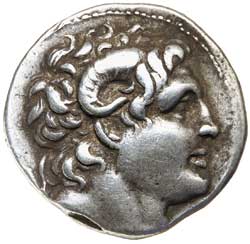 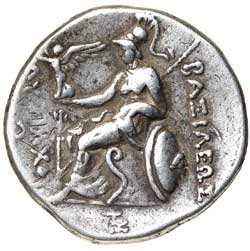 Ex Spink Australia Auction Sale 34 (November 14, 1990), (lot 1951).
The Pergamon mint issues of Lysimachos are considered to have, numismatically, the finest of the artistic representations, of the portraiture of Alexander the Great. The issues signed by the engraver K are considered the best of the dramatic style and the closest to the Copenhagen head of Alexander, which Herbert A. Cahn attributes to his second creative die-cutter "Modellmeister B", c.287 B.C. It was at "the mint in Pergamon while Philetairos was serving Lysimachos there from c.287 B.C. to c.282 B.C. the Alexander heads were done in a local version of this later style which is distinctive and very beautiful (fig. 3a)" Blanche R. Brown "Royal Portraits in Sculpture and Coins" p.14); (fig 3a is the best K tetradrachm in the ANS collection which is in similar condition to this specimen). "In them the surface richness remains but the modelling is more sensitive and subtle. The basic form is relatively more plastic and unified, with fewer concave transitions and with convex forms more clearly delimited and structured...the drawing itself is suave and refined. The Pergamene Alexander ... still has a pervading sense of movement and life. Its particular refinements of features and outlines are not echoed in the Copenhagen portrait, but the smoother, more simplified transitions of the modelling of the face are comparable." (Ibid, p.14-15).