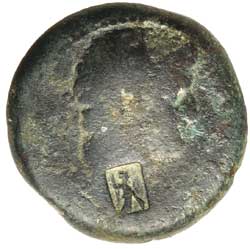 The Athena countermark appears on several issues of the bronzes from Antioch mint and Howgego suggests, because of the connection of Domitian with Minerva, that this is an imperial countermark. He believes it was applied at Antioch between A.D. 83 and A.D.96. It has no denominational significance as it occurs on both denominations of SC coinage. This coin is lacking legend because of wear but is obviously Otho's portrait.