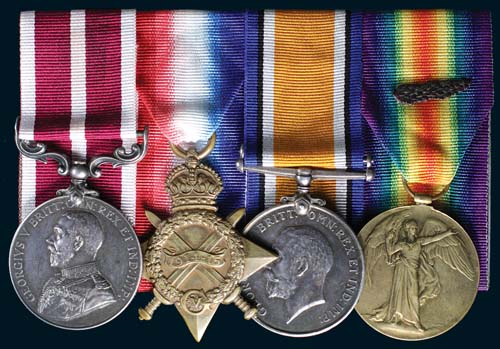 Recommended for Military Cross (As WO Baker was not an officer, presumably this was the recommendation that resulted in the award of the MSM): For consistent good work and devotion to duty as R.S.M. during the period 22 Sept. 1917 to 24th February 1918. East of Ypres during the attack on 4th Oct. 1917 this Warrant Officer did remarkably good work. Whilst the Bn. was assembled for attack, heavy enemy barrage, causing many casualties amongst the carrying party. W.O. Baker reorganized the carrying parties and succeeded in getting all the material, ammunition and bombs forward. His behavior (sic) under these circumstances not only set a splendid example to the men, but did much towards keeping them steady. For period from 22nd September 1917 to the night of 24/25th February 1918.

Recommendation: At Ypres, Gueudecourt, and Flers Sectors, from September, 1916, to February, 1917, Warrant Officer Baker has shown the greatest attention and devotion to duty by organising and controlling ration and S.A.A. parties under many difficulties, such as heavy shell fire and very severe winter conditions. He never once failed to get his hot food rations and S.A.A. parties up to the front line. This Warrant Officer has at all times set a fine example to the N.C.O's and men of his Battalion, both in the trenches and in billets.
(Note: S.A.A. is abbreviation for Small Arms Ammunition.)

With copy of Service File and comprehensive other research.

See also Lots 2165 and 2182 to family members. William Baker was brother to James Baker and uncle to Donald James Baker.