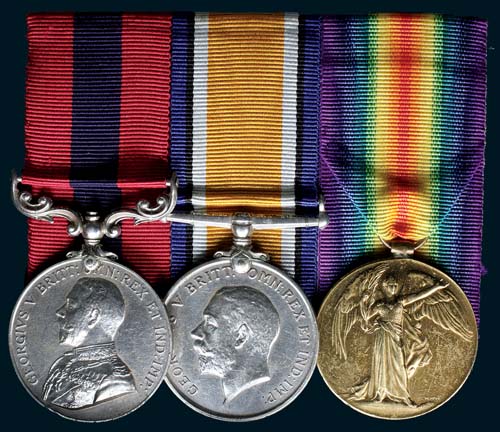 Recommendation (by Brig Gen H.E. 'Pompey' Elliott, commanding 15th Infy Bde): Between Millers Son Post and Zenith Trench on the night of 13th/14th December 1916 Private Mitchell displayed great bravery and devotion to duty. He was acting as runner between Millers Son Post and front line, and left Millers Son Post in company with Pte. Rowley, both of them carrying despatches for various points in the front line. On the way they were caught in a heavy enemy barrage and a shell bursting just in front of them, they jumped into a small trench near by, when a second shell fell, killing Private Rowley and burying Private Mitchell. Private Mitchell succeeded in releasing himself and although the bombardment was still going on searched Private Rowley, took the despatches from his pocket and delivered them as well as his own to the officers concerned. He then continued on and acted as a guide to "B" Company which was being relieved from the line. After seeing the Company safely to their position he returned with his receipts and the private effects of Private Rowley to Millers Son Post, and immediately collapsed. Private Mitchell's act prevented greatest confusion in the relief and was most probably instrumental in saving lines as his despatches contained orders relative to the relief and the enemy barrage was particularly heavy.