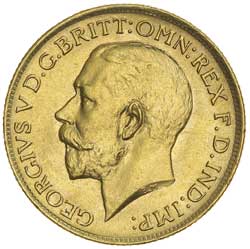 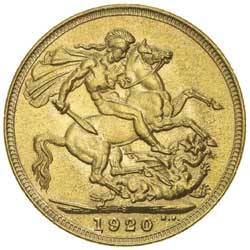 This example, not previously seen, has been consigned by the grandson of Jacob Garrard, who requested the Mint strike a very limited number of sovereigns with the 1920S reverse die to be distributed to his seven children to celebrate his Golden Wedding Anniversary on the 15th of April, 1920. The cost of minting sovereigns had become uneconomic because of the rise in the price of gold (127s 4d per ounce). Throughout the Empire only the Perth Mint struck quantities of sovereigns 1920 to 1924 while Melbourne and Sydney had small issues. It is apparent Sydney had no urgent requirement to mint sovereigns in 1920 with the 1920S mint mark dies.