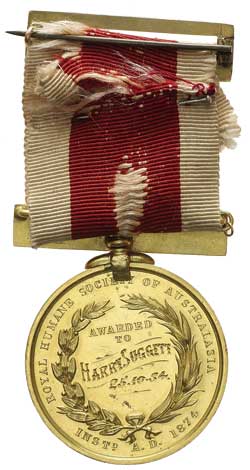 Together with Royal Humane Society award scroll dated 15 July 1935 wherein it was resolved, 'That the Courage and Humanity displayed by Harry Suggett, Norseman (W.A.), Trucker, aged 27 years, in rescuing William George Shackel from the effects of an explosion on October 25, 1934 at the Norseman Gold Mine, Call for the admiration of this Court and justly entitle him to the Clarke Gold Medal of this Society which is hereby awarded.' The scroll is stored in a Royal Humane Society leather pouch (with small section (approx 2.5x2.5cm) missing at front.

RHS case 4879 - Harry Suggett, Norseman (W.A.), Trucker, aged 27 years, who rescued William George Shackel from the effects of an explosion on October 25, 1934, at the Norseman Gold Mine. Shackel was lighting 13 charges of dynamite in the face of a stope. He had lit seven when the first exploded. A miner named, Miotti saw what had happened and ran for help. Suggett ran along the drive, climbed above the timber and dragged Shackel down out of the stope to the drive and to safety. Suggett knew the other charges would explode at any moment, and they actually exploded as he went above the timber, throwing him back, but he persevered and rescued Shackel, who was seriously injured. Suggett was brought to the surface semi-concious. He had been hit by rocks and was badly shaken. He was admitted to hospital and was there for a week. In a special report Mr. A.W.Winzer, Inspector of Mines, says: "A more dangerous position for a man to get into would be difficult to imagine. In my opinion Suggett showed uncommon heroism and risked his life to save a comrade. Any person with a knowledge of explosives and facts of the occurrence must agree that Suggett is entitled to the highest award given for bravery.'

The man who was saved, W.G.Shackel, suffered the loss of a hand and other injuries.