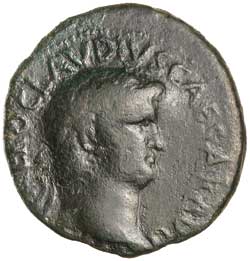 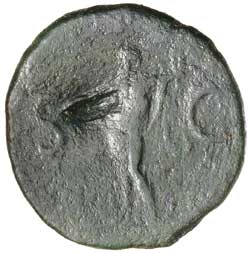 Ex Noble Numismatics Auction Sale 79 (lot 3600).
Walters describing his example on p.333 of the Numismatic Chronicle of 1915 states "Apparently (an) unpublished coin of Nero.. an as with the reverse type of Neptune standing, similar in all respects to that on the coins of Agrippa, although the work is of a different and superior style.." [he then describes the coin] and further states; "This coin, although of the Agrippa type, is not a mule, as the work is of the time of Nero. It is also to be noted that Cohen quotes examples of two 'second brass' coins of Nero with altar reverses that like those of the Augustan type. These together with my coin appear to show a tendency at a certain period of Nero's reign to revive well-known types associated with the reign of Augustus."