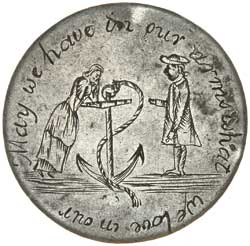 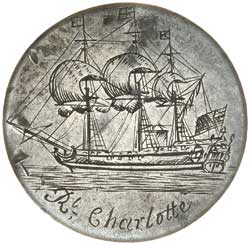 CONVICT TOKEN, a shaved down silver disc (25mm), possibly a shilling, obverse, at the left is a lady leaning forward onto a fouled anchor and at the right, facing her with his hand extended is a man, around the edge is inscribed in running script, 'May we have in our arms what we love in our', reverse, featured is a 3-masted British ship sailing left and below around the bottom edge, 'Rl Charlotte'. Three marks at the left side of the reverse, possibly from being in a mount, otherwise good fine.

The Royal Charlotte was a 3-masted British merchant ship launched in 1819 and used to carry convicts to New South Wales, Australia in 1825. She arrived on 29 April at Port Jackson and then was contracted to take detachments of the 20th, 46th and 49th Regiments of Foot to India via Batavia. Unfortunately on 11 June the ship ran aground on Frederick Reef about 220 nautical miles northeast of Queensland. The crew and soldiers moved to shore before she sank and only two lives were lost. A group of survivors then took the surviving longboat and travelled to Moreton Bay, Queensland arriving in July, and the brig Amity was despatched to collect survivors. The discovery of the wreck of the Royal Charlotte was announced in January 2012.