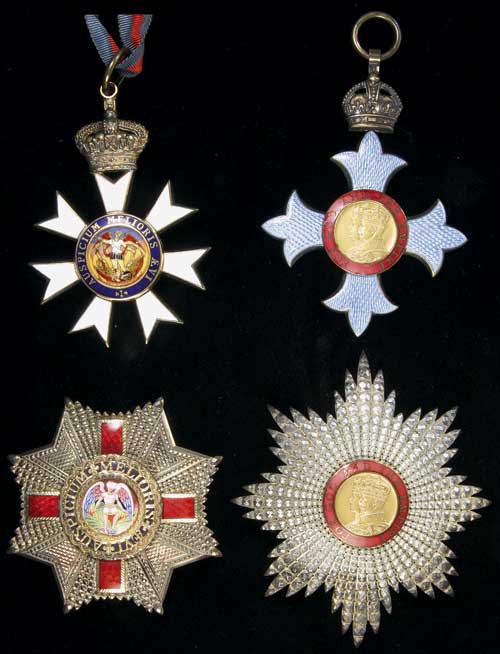 GROUP OF FOUR: Ordinary Knight Grand Cross of the Civil Division of the Most Excellent Order of the British Empire (GBE) breast star type 2 and neck badge; Knight Commander of the Most Distinguished Order of St Michael and St George (KCMG) breast star and also neck badge; Jubilee Medal 1935; Coronation Medal 1937. All honours and medals unnamed as issued. The KCMG and GBE awards in cases of issue, the last two medals swing mounted with a plain, wide maroon ribbon at the front for affixing an honour award. A few tiny chips or edge cracks on two arms on obverse of KCMG neck badge, otherwise good very fine - extremely fine.

Together with two broad shoulder ribbons for GBE, one long and one short with a bow; swing mounted miniature group for KBE, CMG, Jubilee Medal 1935 and Coronation Medal 1937.

Bestowal documents in order of date of issue, as follows.

1. Letter under HM command signed by King George V appointing Trusty and Well-beloved Reginald Wildig Allen Leeper, Esquire, CBE to be Acting First Secretary of Our Diplomatic Service at Our Legation at Warsaw, dated 15th July 1923 with impressed Royal Seal in two places.
2. Appointment Document signed by King George V appointing Reginald Wildig Allen Leeper CBE to be a Counsellor of Embassy in Diplomatic Service at any of Our Embassies or Legations abroad, dated 22 August 1933 in 24th year of His reign.
3. A typed foolscap size letter (3pp) dated 3rd March 1949 from Ernest Bevin (signed personally by him and at that time Secretary of State for Foreign Affairs) to His Excellency Sir Reginald Leeper, G.B.E., K.C.M.G. on the occasion of his retirement written under command of the King to convey to him an expression of his thanks for the outstanding services he had rendered during his distinguished career and his regret that he was leaving his service
4. Birth Certificate issued in NSW Australia on 5 May 1953 stating that baby (unnamed) (later named Reginald Wildig Allen Leeper) was born 15 March 1888 at Toxteth Park, Glebe; father: Alexander Leeper, Warden, Trinity College, Melbourne, age 39, born at Dublin, Ireland; mother: Adeline Marian Allen, age 35, born at Sydney, NSW; married 30 December 1879 at Glebe, NSW; witness: Dr. (Robert) Scot Skirving, and Mrs Dolan; Registrar: F.W.Artlett.
5. Booklet titled Statutes of the Most Distinguished Order of Saint Michael and Saint George, dated 27th January, 1923, soft cover, 42pp.
6. Booklet titled The Most Distinguished Order of St Michael and St George Annual Service in St Paul's cathedral to celebrate the 150th Anniversary of the Order - Wednesday, July 24th, 1968 11.30 a.m., soft cover, 20pp.
7. Book titled When Greek Meets Greek by Sir Reginald Leeper G.B.E., K.C.M.G., 1950, published in London and Canada, hard cover, 244pp with b&w illustrations, signed on the front fly leaf by the author. This book is the writer's personal recollections of his assignments in Greece during the civil war in the 1940s and includes his interactions with Prime Minister Churchill and other prominent people to resolve the issue including Churchill's visits to Greece for meetings with the Greek government and the communist resistance leaders and the eventual restoration of the Greek monarchy although shortly after another guerrilla war broke out between the government and communist rebels.
8. Certificate from the Greek Government dated 6 March 1946.
9. Diaries of R.W.A.Leeper kept during the war years and includes,
a) Jan 1 - Dec 31, 1940 - handwritten daily in a Hub Diary 1940 with hard leather cover.
b) June - December 1941, pp1-147, typed manuscripts of entries.
c) Jan 1, 1942 - Feb 4, 1943 (1942, pp1-63, 1943, pp1-5), typed manuscripts of entries. Some of the entries include details of meetings with Prime Minister Churchill, Sir Alexander Cadogan, Permanent Under-Secretary for Foreign Affairs (1938-46), Lord Halifax, British Foreign Secretary at start of WWII, Sir Fitzroy Maclean, 2nd Secretary in Foreign Office at start of WWII (speculated to be the inspiration for James Bond 007 novels), Hugh Dalton, Minister of Economic Warfare in Churchill's wartime cabinet, also meetings with BBC radio regarding propaganda broadcasts, and many others. He also writes of various air raid experiences in London.
10. British Political Intelligence Department monthly summaries on the progress of the war produced under the name R.A.Leeper (note the variation of his initials). These documents, all on foolscap size paper, include,
a) First Month of the War, 4th October 1939 (7 typed pages).
b) First Two Months of the War, October 27, 1939 (4 printed pages).
c) Third Month of the War, November 28, 1939 (3 printed pages).
d) Europe After Four Months of War, December 26, 1939 (5 printed and 11 typed pages).
11. Letters to Lady Leeper offering condolences on the death of her husband and tributes to his service. The letters are from (Baron) P.H.Gore-Booth of the Foreign Office; Sir Paul Sinker, Director-General of the British Council (Sir Reginald Leeper was an originator of the Council); and Dr Robin L.Sharwood, Warden of Trinity College, Victoria, Australia (Sir Reginald Leeper's father was the first Warden of Trinity College and later Reginald was a student).
12. Two b&w photos of Sir Reginald Leeper.

Sir Reginald 'Rex' Wildig Allen Leeper GBE, KCMG was born at Glebe, a suburb of Sydney, New South Wales on 25 March 1888. His father was Alexander Leeper, a renowned educationalist and publicist born in Dublin, Ireland on 3 June 1848 and first Warden of Trinity College and founder of the collegiate system in the University of Melbourne in Victoria, Australia. Read his lengthy biography in the Australian Dictionary of Biography, Volume 10, (MUP), 1986. Reginald Leeper was educated at Melbourne Grammar School and Melbourne's Trinity College from where he graduated with honours in the classics, Italian and Japanese. He then completed his studies at New College, the University of Oxford in England.

Reginald Leeper worked at the Intelligence Bureau of the Department of Information during WWI and also served for a short time at the Political Intelligence Department. He entered the British Diplomatic Service in 1920 on the recommendation of H.A.L. Fisher, an English historian, educator and Liberal politician. His natural ability and personal qualities saw him develop a good name for himself in the Foreign Office and this reputation was enhanced by his first overseas appointments at Warsaw, Riga and Constantinople. He acted as Charge d'Affaires in Warsaw, Poland on three occasions during 1923 and 1924 and again in 1927 and 1928 and also was in charge of His Majesty's Legation at Durazzo, Albania for part of 1927. During his time in Poland, Reginald Leeper made a rapid grasp of the Polish language and had the ability to make personal contacts in every important circle in Poland and he also became an acknowledged expert on the complex Polish-Lithuanian situation.

In 1929 Leeper returned to the Foreign Office as Head of the News Department and four years later was promoted to the rank of Counsellor. He was largely responsible for the creation of the British Council and for the institution of the foreign language broadcasts of the British Broadcasting Corporation (BBC). In 1939 he was to be appointed as His Majesty's Minister at Bucharest in Rumania but due to the outbreak of war this was not possible so instead he was placed in charge of the Political Intelligence Department of the Foreign Office wherein he built up a team of expert and enthusiastic propagandists who, under his wise guidance, did much to undermine the morale of the enemy. As Ernest Bevin wrote, 'Your handling of the personal and administrative problems presented by so large and heterogeneous a community, working under the abnormal conditions imposed by total war, cannot be allowed to pass without a word of sincere appreciation.'

In 1943, Reginald Leeper was appointed Ambassador to the Greek Government first in London, later in Cairo and finally in Athens. This was a period fraught with difficulties, sufficient to test the skill and patience of the most accomplished diplomat. During this period he succeeded in carrying out His majesty's Government's policy of moderation, in the face of unfair criticism, Greek dissensions and sporadic civil war. He fought hard for reconciliation and finally had the satisfaction of seeing Greece well on the way to holding the elections which enabled the Greek people to elect a Parliament of their own choosing (see his book, When Greek Meets Greek, detailing his experiences during this tumultuous period in Greece).

In May 1946 he was appointed Ambassador to the Argentine Government at a time when the state of Anglo-Argentine relations called for diplomatic skill of a very high order. He played a great part in bringing about the successful conclusion of the Eady-Miranda Trade Agreement of September 1946 and in carrying through the sale to the Argentine Government of the British-owned railways in Argentine. He witnessed the signing of the Andes Agreement by President Juan Peron in 1948.

Sir Reginald Wigram Allen Leeper GBE, KCMG retired from the diplomatic service in that same year and became a director and Chairman of the London Committee of De Beers Consolidated Mines. He died on 2 February 1968. His brother, Alexander Wigram Allen Leeper was also a distinguished British diplomat.

With research and copies of Gazette entries.