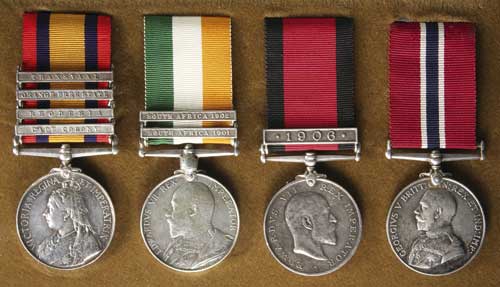 John Bonner from Dixie, Vic; served with 4th Vic M.R. 22May1900-23Jun1901; recruited into Bushveldt Carbineers in East London by Lieut George Witton; one of the members of the Bushveldt Carbineers was Harry 'Breaker' Morant, bush poet, convicted and executed as a war criminal in South Africa; Tpr Bonner was discharged from the unit, now renamed Pietersburg Light Horse, on 31Jan1902; joined Special Squadron of Steinaecker's Horse 28Feb1902 and served until it disbanded 15Jul1902.

With research including a colour photo of the medal group.