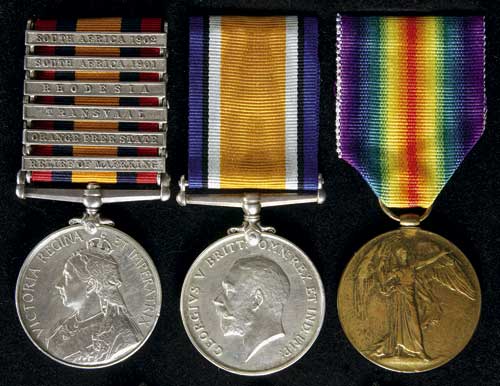 Together with oxidised bronze officer's pips (3).

Note: Recorded in 3QMI records and on medal roll as Alfred John Gorst.

John Alfred Gorst, born 12Sep1875, in Chester, England; to South Africa and appt'd Sgt 17Feb1900; served with 3rd Queensland Mounted Infantry during the Relief of Mafeking and was one of only 110 Australians to receive the Relief of Mafeking clasp and less than three months later he was engaged in the desperate twelve day defence of the Elands River Post; RTA 13Jun1901; Disch.20Jun1901; 12May1913 Captain with Annerley Road Company, 8 Bn Senior Cadets; Unallotted List with South Brisbane Training Area Senior Cadets 16Jul1913; Volunteered for AIF at District HQ 06Aug1914 and rejected because Area Officers required in Australia; Volunteered again in late Aug1914, medically examined and told to wait; accepted to AIF 15Sep1914 at age 38 while employed as a Fire Insurance Inspector and with previous service in the Boer War and prior to that 3 years with Earl of Chester's Vol Bn Cheshire Rifles; Emb.24Oct1914 from Sydney as AIF officer accompanying Imperial Reservists; Emb.01Nov1914 from Albany WA with 1st Div AIF, landed in Egypt and then ordered to UK; arrived UK 19Dec1914 and appt'd Adjutant to Aust Divisional Ammunition Park (Motor Transport), Romsey; took over as Adjutant ANZ Base Depot & Convalescent Camp 26May1915; Ordered to organise all Aust cars, ambulances & lorries and form the Australian Motor Transport Service and appt'd CO of the unit 19Jan1916; took draft of 12 officers and 1,209 men to France Sep1916; Appt'd OC 14 Training Bn 03Oct1916 but a serious health problem (neuritis) caused his repatriation to Australia; arrived Brisbane, Qld 05Jan1917.

Captain Gorst was presented with the 1914-15 Star which he wore on parades but post war he was ordered to return it and told he did not qualify for the award. Understandably, he was furious and wrote a long, detailed letter to the Officer-in-Charge of Base Records, Melbourne and part of this letter reads as follows. 'I do not claim the 1914-15 Star because I had made a temporary landing in Egypt but on the grounds that I was on a Transport, On Active Service, in Command of Troops & in a Theatre of War, liable to be ordered to go in any direction & it was no desire of ours that we were ordered to proceed to England instead of into Action, furthermore as Nurses & Orderlies in Hospital ships and transports received the Star for doing precisely what we did I fail to see where I did not qualify.'

Together with research and copy of Service File.