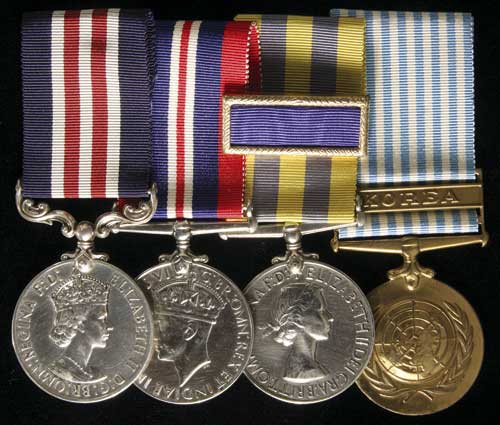 Together with USA Presidential Unit Citation.

The award was presented by Her Majesty The Queen at Government House on 6 February 1954 to L/Cpl M.E.Wilson, Eastern Command Provost Coy, Victoria Barracks, Paddington, NSW. This was the first investiture and awards ceremony held by a British monarch on Australian soil.

3RAR had taken part in the Battle of Kapyong, 23rd-25th April, 1951 where 3RAR and 2PPCLI repulsed massed Chinese human wave attacks in bitter hand-to-hand fighting during which 3RAR suffered 32 killed and 54 wounded. 1 x DSO, 1 x MC, 1 x DCM, 4 x MM, 1 x MID were awarded to soldiers of 3RAR for the Battle of Kapyong and the regiment also received the US Presidential Unit Citation. As a member of 3RAR L/Cpl Wilson was entitled to wear this award.

In Korea, Wilson was Section Leader 6 Platoon, B Coy. Following is a brief account of the action where he was awarded the Military Medal when 3RAR launched Operation Buffalo, a company strength raid on Chinese positions on Hill 75 with a plan to capture enemy prisoners and interrogate them. 'The platoon attacked the first line of trenches in the centre of the hilltop, peppering the enemy with machine gun fire and grenades. But as the Australians crossed that line of trenches they were attacked from the rear by Chinese soldiers who had now come out from previously protected positions. The Diggers replied with Owen guns and phosphorus grenades, throwing their bombs down tunnels where the entrances were visible. Suddenly a Chinese machine gun opened fire from just ten metres on a forward section of No.6 Platoon, led by L/Corporal M.E. Wilson, who charged the gun single handed but was cut down as a burst of fire ripped across his flak jacket. Wilson then got to his feet and ran towards the enemy gun while throwing grenades at the position. He killed the gunner before falling wounded from a 'masher' grenade, at which point Pte Ron Cashman ran forward and killed the machine gunner's number 2 with an Owen gun.

The Chinese quickly disappeared into the deep labyrinth of their tunnels and brought down heavy mortar fire on top of their own defences. Casualties among the Australians were rapidly mounting so Captain Richardson ordered his men out. Pte Cashman and Pte Johnny 'Jack' Gill dragged the wounded Wilson back to the Australian lines. Later Ron Cashman joked, 'Max always said - 'They dragged me down the hill so fast, by the legs, I dug a furrow with my nose.' B Company had lost two men killed, one died of wounds, one POW and twenty two wounded; the Chinese, twelve killed. No Chinese prisoners were taken. Several Australians were decorated for their part in the action including Wilson who received a Military Medal and Captain Richardson a Military Cross.

From the British General Hospital at Kure, Japan, Max Wilson wrote to Jack Gill and Ron Cashman a letter which today is held by the Australian War Memorial. Some excerpts of that letter include,

'Before I go any further, Thanks again for getting me off .75. I would have been kicking shit up hill getting off by myself.' .... 'I have only got flesh wounds. One in the muscle of the left leg and in the thigh and right cheek of the arse. They got the junk out and stitched me up. I get the stitches out on the 27th. I'll be okay to get out of this bloody bed then and hobble around. I hope.'...'By the way Cashie you got that b*st*rd that threw the masher didn't you?.........'Best of luck. Keep Ya Head Down.'

Only 45 MMs and one MM and Bar were awarded for Korea.

With copies of gazette, citation, recommendation, War Diary entry of above event and a copy of a photo of L/Cpl Wilson and Pte Cashman.