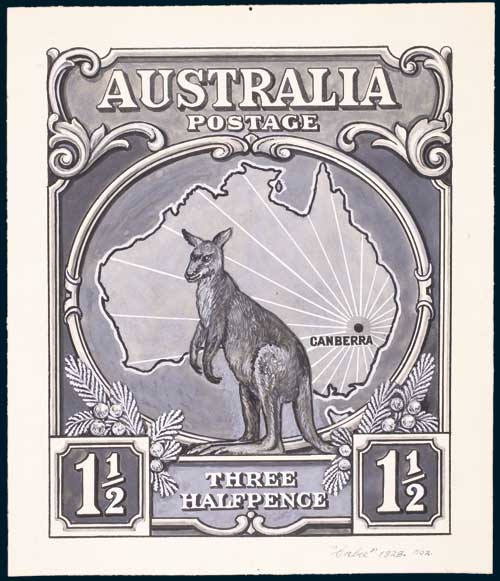 AUSTRALIA, 1928 Melbourne Exhibition stamp design by Mr.E.N. Broad, London, the submitted design for the 1 1/2d as an original drawing (183x155mm) depicting a kangaroo within the map of Australia highlighting Canberra with wattles above value tablets, and enclosed as "Enbee 1928 No.2". In black and white ink, as new.

The National Library of Australia using the Argus newspaper Friday 27 July 1928 comments on this.

"Stamp Design Competition.
Mr. R. A. Harrison (was) first. Three of the first five successful competitors in the stamp design competition conducted by the committee of the International Philatelic Exhibition are Victorians. More than 100 designs were submitted from all parts of Australia, Great Britain, France, India, South Africa, and the United States, and five of the first seven successful competitors were Australians. (The awards were announced yesterday.

Mr. R. A. Harrison, of the Government note printing branch, Fitzroy, obtained the First award-a gold medal. His design embodied the King's head. The second place was taken by Mr. H. Perry, of Venusstreet, Caulfield, with a koala design, for which a silver medal was given. The third award (bronze medals) was shared by Mr. E. N. Broad, 50 Treen avenue, Barnes, England, and Mr. E. M. Horne, Tyne street, Gilberton (S.A.). The design submitted by Mr. Broad was of the King's head, and that submitted by Mr. Horne had as its base the kangaroo. The cockatoo design of Mr. J. Trevor, Nar-nar-goon, was highly commended. The designs of Mr. F. H.Burrell, sixth avenue, Joslin E. Adelaide (kangaroo and wheatfield), and of Mr.H. W. Barr, Nasik road, India (allegorical). Special bronze medals will be awarded to the three last-mentioned competitors. All the successful designs have been sub-mitted to the Postmaster-General's department with a view to possible adoption for use as Australian stamps. Should any design be accepted the author will be granted a premium of £25. It is considered possible that each of the first three or even four designs may be adoptcd.

Mr. Harrison, the winner, also won the competition conducted in 1926 for the Canberra stamp, and both he and Mr. H. Perry, the second prize winner, are officers of the Government note and stamp printing branch. Mr. Broad is on the staff of a firm of stamp printers in England, and Mr. Barr is the manager of the Indian Government printers. The judges of the competition expressed appreciation of the high average quality of the designs.

Mr. Broad submitted this design as his second entry in this competition. The owner paid many years ago $2000 for this drawing.