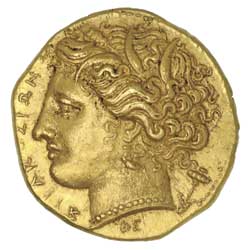 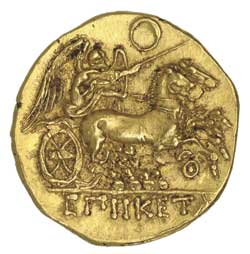 Ex Noble Numismatics Sale 94, lot 4672. Previously Gorny & Mosch Auction 180, lot 63.
Little is known of Hiketas beyond his coinage, but Buttrey in Morgantina Studies "The Coins" pieced together a history based on the numismatic evidence. Following Hiketas's defeat of Phintias, tyrant of Akragas, he set out against the Carthaginians. This campaign ended in disaster at the Terias river, northwest of Syracuse. Buttrey, based on his die analysis, concludes that this gold issue was struck very hurriedly towards the end of Hiketas's reign, and theorizes that this series was issued to pay for his Carthaginian campaign.