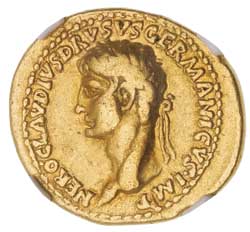 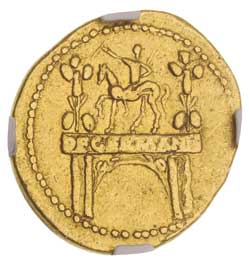 Slabbed by NGC as choice VF strike 5/5, surface 3/5.
Nero Claudius Drusus was the second son of Livia by her first husband, Tiberius Claudius Nero. He was brought up in the household of Augustus, who took note of his abilities and fast-tracked his advancement in military and civil affairs. In 16 BC he was married to Antonia, daughter of Mark Antony and Octavia, and the happy union produced two sons, Germanicus and the future emperor Claudius. In 12 BC, Augustus gave him command of the planned conquest of Germany, which he seemed to have achieved in four skilfully waged campaigns over the next three years. His letters written during this time (later excerpted by Suetonius) indicated he hoped for a restoration of the Republic, an attitude which might have strained relations with Augustus. But Drusus never returned to Rome, for a serious equestrian accident in Germany led to an infection which claimed his life in the summer of 9 BC. Despite his Republican leanings, his brother Tiberius and son Claudius both became Roman emperors, the latter of whom struck this coin honoring his illustrious father.