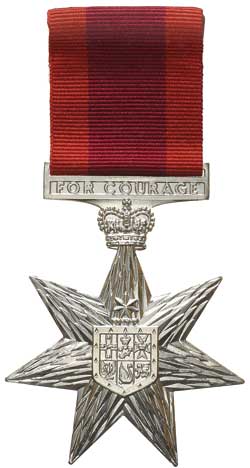 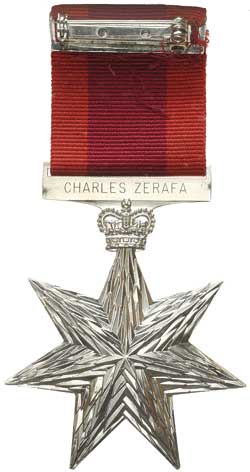 Together with,
1) Official cases with miniatures and ribands for both medals and a small lapel star for first medal.
2) Framed certificate for Star of Courage.
3) Another item presented to Mr Zerafa at the investiture being a Certificate for the Star of Courage mounted in a velvet covered, large binder decorated on the front cover with a gilt disc bearing an enamelled crowned wattle.
4) Investiture booklet for the presentation of the Star of Courage by Governor Peter G. Underwood AC, at Government House, Tasmania on Friday 4th May 2012.
5) The Royal Humane Society of Australasia Inc, Annual Report 2008 with details of Bravery Awards.
6) Research including numerous newspaper accounts of the incident resulting in the award to Charles Zerafa and also coloured photos of Charles Zerafa after he suffered severe facial wounds when he was bashed by two men in 2013.

Star of Courage: granted 22/8/2011 to Charles Zerafa in recognition of an act of conspicuous courage in circumstances of great peril.

Citation: On the morning of 9 May 2006, Mr Zerafa assisted a wounded police officer and confronted an armed offender at Mangalore, Tasmania.

Mr Zerafa was travelling along the Midland Highway at Mangalore, Tasmania, with a friend when he came upon a police vehicle and another vehicle stopped by the side of the road. Two other drivers had stopped by the vehicle and were attempting to assist a police officer, who had been shot and was lying on the ground. One of the men notified police on the police radio of the situation, and informed Mr Zerafa and his friend that a man was armed with a gun. As the two men moved away, Mr Zerafa approached the wounded officer and checked for a response. Despite the considerable risk to his own safety, he then yelled to the armed offender and tried to negotiate with him, but the man responded by pointing a gun directly at him. Mr Zerafa moved away as the offender knelt down beside the wounded police officer. The offender then went back to his vehicle and appeared to be reloading his weapon, which allowed Mr Zerafa the opportunity to return to the police officer. While continually trying to negotiate with the gunman, Mr Zerafa inched closer to him, however the offender responded by pointing the gun at him again. Mr Zerafa continued negotiating until police arrived and arrested the man.

Citation: Charles Zerafa, of Roger River, Tas, in going to the rescue of a police sergeant from being killed by an armed man on the Midland Highway near Brighton, Tas on 9 May 2006.

At about 10.45am a police sergeant intercepted a suspect vehicle being driven erratically. As he approached the car, the male driver produced a .22 calibre pistol and shot the sergeant in the face. The sergeant fled to the rear of the suspect car and fell face down on the ground, playing "doggo" but bleeding profusely from the mouth, hoping the assailant would believe he was dead and leave.

Mr Zerafa and a friend stopped and came to assist and were told by others who had also stopped that the car driver was armed.

Mr Zerafa's friend moved back some distance while Mr Zerafa walked towards the vehicle and checked the policeman without any response from the suspect driver who then reached into his car and produced a pistol and pointed it at Mr Zerafa who then backed away and tried to negotiate with the gunman. The gunman then went back to his own car as Mr Zerafa then went to the wounded officer and, with the pistol pointed at him, continued to try to negotiate with the gunman for several minutes when further police arrived and arrested the offender.