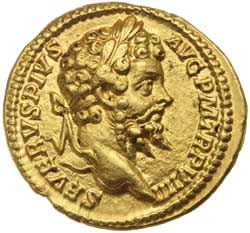 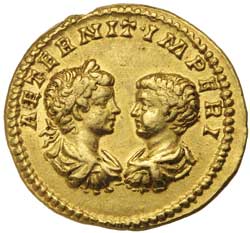 Ex The New York Sale XL, lot 1239. Previously NAC 78, lot 1025.
See description listed at the New York Sale - "This beautiful and rare coin belongs to the dynastic series issued by Septimius Severus as a sign that after years of civil war, the Empire would again enjoy stability. The succession was made secure by his two sons, Caracalla and Geta, who were trained as his successors and are depicted on the reverse. The legend surrounding their portraits, which refers to "everlasting [Roman] rule" leaves no doubt about Severan dynastic pretensions. Unfortunately, the stability that Severus wished to present was largely a sham as a terrible sibling rivalry existed between Caracalla and Geta. Despite their father's best efforts to heal the rift between the brothers, the gulf only widened over time, and after his death in AD 211 his sons did not last a year sharing power before Caracalla murdered Geta, destroying the dynastic image that Septimius Severus had crafted.