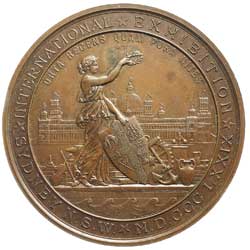 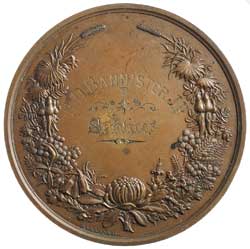 Together with newspaper image of Colonial Commissioners including R.D.Bannister.

R.D.Bannister was Secretary to the Victorian Colonial Commissioner to the Sydney International Exhibition, The Hon J.J.Casey CMG, MP.

Robert Dixon Bannister was born in London in 1816, and arrived at Port Phillip in January, 1854, in the Phoenix. In the same year he settled at Geelong, where he opened the first homoeopathic business in the Colony of Victoria. After various changes of occupation incidental to the lives of many colonists, he in 1865 was engaged as a travelling agent and lecturer by the Australian Mutual Provident Society, which position he filled successfully and with credit, assisting greatly in making that institution popular. After ten years labours he severed his connection with that institution to return to his old profession, settling in Ballarat, where, in 1877, he mooted the idea of a Juvenile Industrial Exhibition, inviting the young people of all the colonies to assist. This first Exhibition of its character was carried out to a successful issue in the Alfred Hall, Ballarat, and the adjoining Market Buildings, Mr. Bannister being the Honorary Secretary.

As a temperance reformer he was a pioneer of good and useful works, and so far back as the year 1841, he was one of a band of active men who commenced the Band of Hope movement in England, and in the first year of his arrival in the colonies planted the same standard in Victoria at Geelong. He was also one of the popular temperance reformers who, in 1850, established in London the famous National Temperance League, whose operations were still carried on under the able secretaryship of Mr. Bobert Bae, and his name has long been a household word all over Victoria and many parts of South Australia and New South Wales. As a lecturer on Life Assurance and Temperance he was eminently popular and successful in the latter cause; thousands became converts under the influence of his able advocacy. He was one of the pioneers of the Order of Sons of Temperance in Victoria, and, under the authority of the Victorian District, founded the Independent Order of Rechabites in New South Wales.

Another of the useful works Mr. Bannister put his hand to was the instituting of the first Penny Savings Bank in Victoria, and he helped to frame regulations for carrying out Penny Savings Banks in connection with the State Schools in Victoria, ordered by the Minister of Education. In his position as Secretary to the Executive Commissioner of Victoria to the Sydney International Exhibition he was much respected.