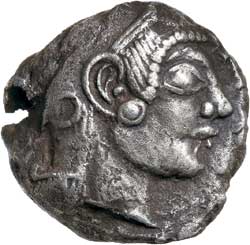 Ex Triton XV, lot 1163 and the 2007 Shaikhan Dehri Hoard.
This coin features in O. Bopearachchi, "Premi?res frappes locales de l'Inde du Nord-Ouest: nouvelles donn?es," in Tr?sors d'Orient: M?langes offerts ? Rika Gyselen, Fig. 1.
CNG provides the following description:
While Athenian tetradrachms and their imitations functioned as an international currency in the eastern Mediterranean and Levant as early as the 5th century BC (see M.J. Price and N. Waggoner, Archaic Greek Silver Coinage: The Asyut Hoard [London, 1975]), examples of this coinage have rarely been found in a Central Asian hoard. The most notable example is the 1933 Tchamani-i Hazouri hoard (circa 380 BC), which included 34 Athenian tetradrachms of the mid to late 4th century BC and one imitation (see D. Schlumberger, "L'argent grec dans l'empire ach?m?nide," in Tr?sors mon?taires d'Afghanistan [Paris, 1953]). In 2007, at the site of ancient Pushkalavati (Shaikhan Dehri) in Pakistan, a small coin hoard was discovered that contained this tetradrachm of Athens, in addition to a number of local types, some blank flans, and four cake-type cast ingots. Dated to circa 500/490-485/0 BC, this coin is the earliest known example of its type to be found so far east. For further discussion of this hoard, see the note to lot 1366 below, as well as O. Bopearachchi, "Premi?res frappes locales de l'Inde du Nord-Ouest: nouvelles donn?es" in M?langes Gyselen.