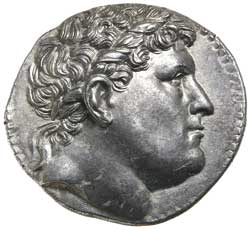 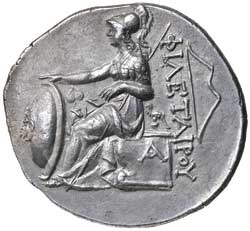 Lysimachos entrusted the Pergamene treasury to the eunuch Philetairos, but Philetairos changed his allegiance to Seleukos shortly before the Battle of Korupedion in 281 BC, when Seleukos defeated and killed Lysimachos. Seleukos was assassinated the following year, but Philetairos continued to acknowledge Seleukid suzerainty, as reflected by a series of tetradrachms struck at Pergamon under Philetairos for Antiochos I bearing the portrait of Seleukos I. The Pergamene kingdom enjoyed considerable autonomy under the Seleukids, but in 261 BC, with the encouragement of Ptolemy II, who was at war against the Seleukids, Eumenes I revolted, and defeated Antiochos I in battle near Sardis in Lydia. The remainder of his reign saw an expansion of Pergamene power, including the foundation of a number of cities. Pergamene expansion was always at the expense of the Seleukids, and the two kingdoms remained in opposition. This opposition reached a climax during the reign of Eumenes II, who allied with the Romans during their war against the Seleukid king Antiochos III 'the Great.' This alliance directly contributed to the defeat of the Seleukids at the Battle of Magnesia in 190 BC. In gratitude for his assistance, the Romans gave Eumenes control of Phrygia, Lydia, Lycia, and Pamphylia, and sought to strengthen the Pergamene kingdom as a buffer state between themselves and Seleukids.

The coinage of the Pergamene kingdom is highly conservative, as their tetradrachms employed the same types for the entirety of its existence. The obverse featured the portrait of the founder of the kingdom, Philetairos, and the reverse featuring their patron goddess, Athena. Differentiating the issues of the kings is dependent upon the various subsidiary symbols, monograms, and other details on the coins as noted in Westermark's seminal survey of the kingdom's coinage (with a few later modifications, particularly those noted in the analysis of the Meydancikkale hoard).