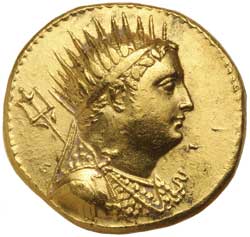 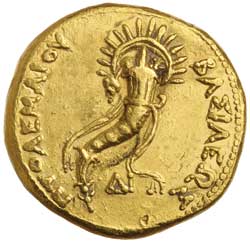 Ex Robert Tonner Collection. Previously Freeman & Sear, 24 April 2009, with ticket.
Ptolemy IV struck an extensive series of octadrachms for his father Ptolemy III, portraying him with the divine attributes of Helios (with the radiate diadem), Zeus (the aegis), and Poseidon (the trident and with the middle prong modified with the addition of the Egyptian lotus tip). The concentration of such symbols is intended to show Ptolemy III as the master of the three elements: heaven, earth and sea. The radiate crown above the cornucopia on the reverse is another distinctive feature of Ptolemy III's iconography, and was later adopted by his grandson, Ptolemy V.