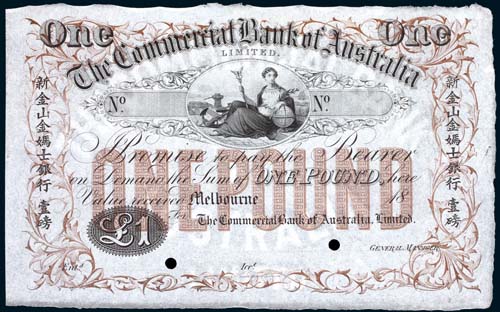 The Commercial Bank of Australia was founded in 1866 in Melbourne and originally concentrated on small business and on farming. It was the only Australian Bank to include inscriptions in Chinese on the banknote (probably as claimed that a prominent Chinese businessman on the first Board, recognised the potential of the large minority of the overall population who were migrants from China). The text in Chinese translates as 'One Pound New Gold Mountain', (the Chinese name for Melbourne, as San Francisco had been translated into Chinese as Gold Mountain at the time of the Californian Gold Rush a few years earlier).