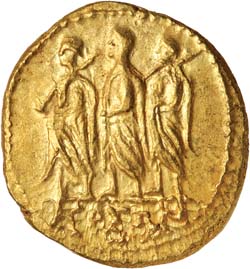 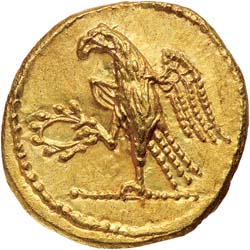 The Koson coinage was struck around 42 B.C., when Brutus, the exiled assassin of Julius Caesar, was raising troops in northern Greece in preparation for the final confrontation with Caesar's heirs Mark Antony and Octavian. Brutus had his own travelling mint, but this coinage was evidently a gift from an allied Dacian king from the lower Danube region. The king's name Koson appears on the coin and Brutus' name is reduced to a monogram which appears on some issues, including this example. Koson's coin type makes sense in terms of Roman propaganda. The eagle trampling a sceptre and the wreath symbolizes the anti-monarchical sentiments that prompted Caesar's assassination. The obverse type showing a Roman magistrate with his attendants, is copied from the coinage struck by Brutus himself in 54 B.C. It depicts an ancestor of Brutus who overthrew the Tarquin kings and founded the Roman Republic, serving as its first chief magistrate. This design thus serves to emphasize Brutus' attachment to the Republican traditions. See Winkler J., "Consideratii despre moneda 'Koson'," Etudes et Recherches d'Histore Ancienne Vol.23, No.2 (1972), pp. 173-199.