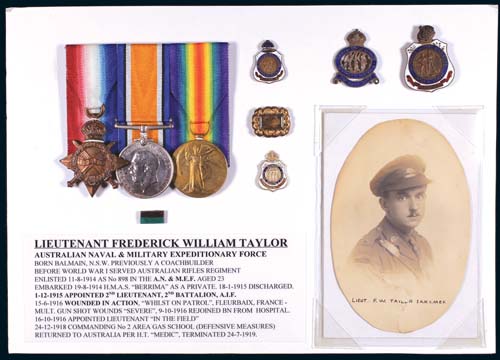 Together with Nearest Female Relative's badge (AIF), no bar; Returned Sailors & Soldiers Imperial League (large 2 figure type), with 1919 slide on crown; another (small 2 figure type), with (19)31 slide on crown (no lugs); Returned Sailors Soldiers & Airmens Imperial League (3 figures) (KC) (no lugs); locket of blonde hair in frame (tested as 15ct; tot wt 3.91g); small 2nd Battalion enamelled colour patch; Souvenir of Welcome Home fold-out card with printed name of Lieut. Fred. W. Taylor, 2nd Battalion, After 3 1/ 2 Years Active Service, and written at the bottom, 'June 2nd 1919', on the front of the card is the unit colour patch and around the centre fold are two strands of string in the unit's colours; a page from a Legacy magazine c1962 with one side devoted to 'Vale, Legatee Fred Taylor'.

Fred Taylor died in 1962 and his funeral service was held at the Northern Suburbs Crematorium with many ex-servicemen and women in attendance. Part of the tribute to him published in the Legacy magazine was as follows.

'Fred joined Legacy in 1940, when he was already hard at work on the Art Unions which provided the sinews of war for the War Veterans' Home in the early years. The R.S.L. profited substantially from his work in raising funds, and he was made a Life Member of the League for his services. He carried on as Director of the Art Unions and Lotteries, until last year when illness caused his withdrawal. He had been an active member of the 2nd Bn. A.I.F. Association for the best part of 40 years, and helped greatly in the accumulation of the records of that famous Battalion. He was also an active and enthusiastic member of the A.I.F. Ball, later to be renamed The Victory Ball, and up till last year was responsible for the decoration and arrangements of the official table.

In Legacy he was always an enthusiastic worker, and in spite of his pre-occupation with the intense duties of the Lottery, he continued until last year to be an active member of Enrolment and Reception Committee. Fred also played a small part as an Advisor when opportunity came. He is best remembered by the old lads of the 2nd Battalion for his surprising efforts on behalf of the fighting man in France, when he introduced amenity services right into the front line to a degree which was rarely equalled in the more enlightened days of the 2nd A.I.F. He was indefatigable in the interests of Battalion veterans, and treasured the company of surviving early members, visiting them in hospital, arranging outings, and so forth.'