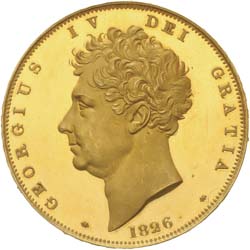 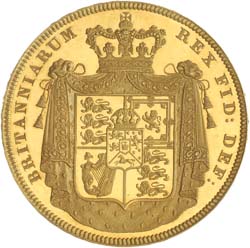 1826 PROOF FIVE SOVEREIGNS, George IV, 1820-30. S-3797, L&S 27, W&R 213 (R3) 39.91g. Edge inscription DECUS ET TUTAMEN ANNO SEPTIMO "an ornament and a safeguard seventh regnal year" in small raised (in relief) lettering ^Reverse - Shield bearing G IV royal arms within an ornately edged ermine mantle drawn at the top corners by tasselled cords and surmounted by a stylized St Edwards Crown. The design is surrounded by the Latin legend BRITTANARIUM REX FID:ei DEF:ensor "King of the Britain's defender of the faith". A denticular border and a narrow-raised rim surround the coin. All parts of the design in relief exhibit delicate frosting over mirrored fields. ^Deep cameo proof with planchet and die polishing striations in the fields only, minor hairlines near G of Gratia and in front of King's nose, otherwise nearly FDC and rare.

GIV as king his arms were those of his two kingdoms, the United Kingdom and Hanover, superimposed: Quarterly, I and IV three lions passant guardant (for England); II a lion rampant within a double tressure flory-counter-flory (for Scotland); III a harp stringed (for Ireland); overall an escutcheon tierced in pall reversed (for Hanover), I two lions passant guardant (for Brunswick), II a semee of hearts a lion rampant (for L?neburg), III a horse courant (for Westphalia), overall an inescutcheon charged with the crown of Charlemagne, the whole escutcheon surmounted by a crown.