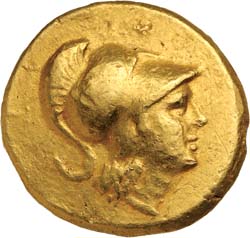 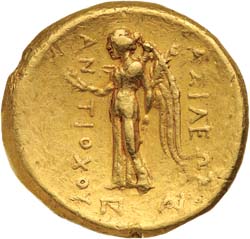 Ex Greg Melick SC Collection, previously from Noble Numismatics Auction Sale 89 (lot 3746).
The great rarity of the 'Alexander type' staters issued in the name of another ruler has been well established. The issue from Sardes occurs for Antiochos II for only two staters (including this example). Others of this ruler are known for Miletos and Susa mints. Antiochos I issued an example for Susa mint. A range of mints issued similar coins for Seleukos I and a solitary example for Seleukos II probably for Kommagene mint and a similar examples for Alexandreia Troas mint for Antiochos Hierax and Antiochos III for Aspendos mint. Issues of several Macedonian kings also occur beside the common issues of Philip III, they include Lysimachos from several mints all very rare, Demetrios Poliorketes and Antigonos Gonatas ($65,000 in 2012).