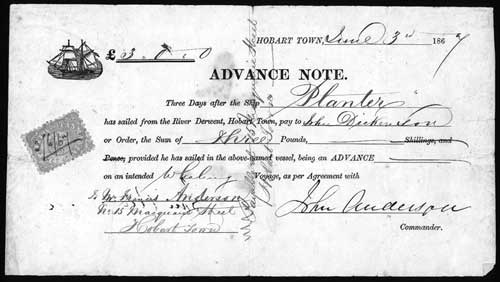 SEAMAN'S ADVANCE NOTE, issued at Hobart Town, June 3, 1867, for three pounds, 'Three days after the Ship 'Planter' has sailed from the River Derwent, Hobart Town pay to John Dickenson or Order, the Sum of 'three' pounds, provided he has sailed in the above named vessel, being an Advance on an intended 'Whaling' Voyage as per Agreement to Mr Francis Anderson No.15 Macquarie Street, Hobart Town, signed John Anderson Commander', fixed with 3d duty stamp and crossed with payment details. SEveral folds, otherwise very fine and rare.

The 'Planter' was a 231 ton barque, built at Grimsby, England. It is noted as being registered at Hobart Town in 1867, sailing from this port as a whaler and trader under Captain Anderson until she was hulked in 1889.