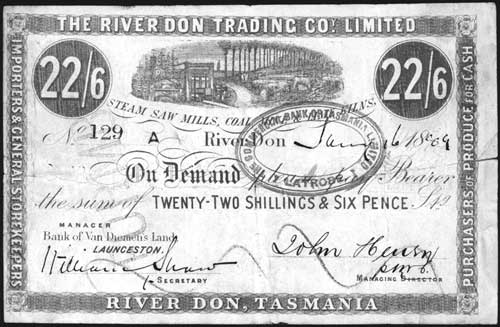 The River Don Trading Company was founded in 1872 and was a successful business, even when their bankers the Bank of Van Diemans Land had failed in 1891, this company continued to trade. John Henry a signatory on this note, was clever at finances and in 1892 became Tasmanian Treasurer. He also was a member of the Convention that framed the Australian Constitution making this note a link to the formation of Australia. The River Don Trading Company issued a range of notes from five shillings to five pounds which included some odd denominations as 22/6, 25/- and 30/- which must have had some relevancy to the firm's business. Ex Noble Numismatics Sale No.40 (lot 1647)and Dr A.Nicholson Collection (lot 1647).