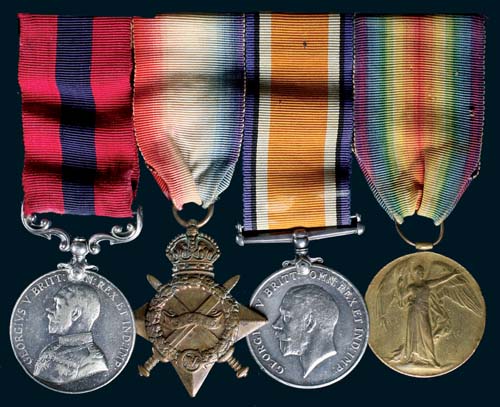 Recommendation: For conspicuous gallantry and daring. On the 4th Oct. and again during the attack on 9.10.17 he acted as runner and did magnificent work carrying despatches through the heaviest barrages. When the position of one of our new forward posts on 9.10.17 was obscure he volunteered to look for it. After traversing No Man's Land under Machine Gun and rifle fire he was successful in locating the post which would otherwise have been cut off. His devotion to duty, courage and endurance were splendid throughout.

John Charles McFarlane, slaughterman, age 18, born at Port Melbourne, Vic; Enl.12Jul1915 at Melbourne, Vic in 5th Reinf 22Bn, with previous service in 52 Bn Port Melbourne Senior Cadets; Emb.29Sep1915; Disemb.23Oct1915 at Suez; to 1st Aux Hosp at Abbassia with dysentery 15Dec1915; to France 19Apr1917; TOS 22Bn 09May1917; Appt L/Cpl 14Oct1917; awarded DCM 20Nov1917; Reverts to rank of Private at own request 06Feb1918; several instances of disobeying orders or being AWL until found guilty in a Field General Court Martial held at Havre on 24Jun1918, charged with (1) neglecting to obey Base Standing Orders (2) striking his superior officer (3) resisting an escort - found guilty on all charges and sentenced to 3 years P.S.D. and forfeiture of DCM - subsequently sentence commuted to 1 year hard labour and forfeiture of DCM remitted; Accidentally injured on 31Jul1918 while trying to escape form Military Prison Havre (fell from top of fence); due to RTA but did not embark and recorded as 'Illegal Absentee' 28Jul1919;
Disch.28Jul1919 in consequence of Illegal Absence; RTA 04Dec1920; Disemb.12Feb1921 at Melbourne, Vic.