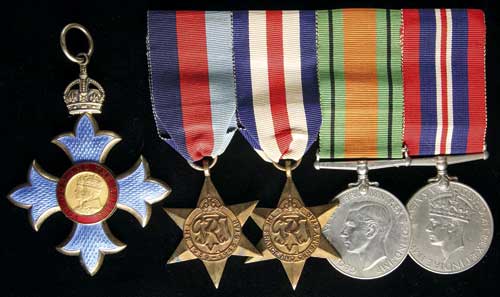 Together with case for CBE by Garrard & Co Ltd, and with Instructions for Wearing; a swing mounted matching set of miniatures with the Order mounted in the group as a breast badge; a sterling silver serving tray (1.14kg), hallmarked for Sheffield 1962 by maker, Poston Products, with four short legs, inscribed in the centre, 'J.L.Farrington, C.B.E./Presented by/The Nigerian Chamber of Mines', and around this are the signatures in relief of the 16 presenters; golf trophy marked on side, 'Angus Butler Golf Cup/J.L.Farrington/1964', hallmarked for London 1963 by maker, Poston Products, golfer on top of trophy broken loose and needs repairing (the figure is inside the cup) (Note: The cup is named in honour of Angus Butler who laid out the golf course at Rayfield, Jos, Nigeria in 1913 and was the first Club Captain. The annual tournament for the trophy was held from 1948 to 1975); British Passport for Southern Rhodesia valid to 21 November 1939 and named to John Leonard Farrington, Geologist, born at Sydney NSW on 14.6.1906 and domiciled in S.Rhodesia, with his photo and various visa stamps for different countries.

CBE: Fourth Supplement to LG 1/1/1964, p44 - on the advice of Her Majesty's Nigerian Ministers to Jack Farrington, Esq, For services to the tin mining industry.

John 'Jack' Leonard Farrington was born on 14 June 1906 in Sydney, Australia, to English parents. He grew up in Fiji, where his father who was a doctor died in 1915. The following year his mother moved the family to Canada, where she was appointed Matron at the Provincial Home for Incurables at Marpole in Vancouver. Jack was educated at public and high schools in Vancouver, British Columbia and then at the University of British Columbia graduating as a Bachelor of Applied Science in May 1928, with 1st class honours in mining engineering. In his third year at university he was awarded its Dunamuir Scholarship for highest standing in mining engineering.

After graduation, his profession was that of a field and mining geologist, in sub-Saharan Africa. From June 1928 to May 1931 he was a field geologist with Loangwa Concessions in Northern Rhodesia (present-day Zambia). From May 1931 to July 1936 he was in Southern Rhodesia (present-day Zimbabwe), working for the Gold Fields Rhodesian Development Company, for valuation and development of prospects, and as the only geologist at the Wanderer Mine. He looked at the Kakemega goldfield in Kenya, then enjoying a gold rush, but did not stay. From July 1936 to November 1937 he became an assistant geologist at the head office of New Consolidated Goldfields, at Johannesburg, South Africa. Moving to the Gold Coast (present day Ghana), from November 1937 he became chief geologist with the Ashanti Goldfields Corporation and was the first resident geologist at the rich Ashanti gold mine.

When he volunteered for military service in 1939 his application claimed experience in (1) interpretation of air surveys, (2) mine development, (3) diamond drilling, (4) organization of field parties and prospecting units, and (5) handling of labour; also 'special knowledge' of aerial surveying (based on the planning and interpretation of four such surveys), tunnelling, surveying, and general reconnaissance of unmapped or poorly mapped territory. However, he was not accepted for service due to poor vision in one eye. Up until 1942 his work included wide experience in siting positions for boring and control of boring operations involving diamond drills, including siting of boreholes for water, and in 1941 he became an Associate (postwar a Member) of the Institution of Mining and Metallurgy (UK), and in February 1943 also a Fellow of the Society of Economic Geologists (USA).

When he was finally accepted for military service in 1942, at the age of 36, he sought employment with boring units of the Royal Engineers. However, after initial training with No. 6 Training Battalion RE (at Elgin in Scotland) from 30 October to 21 December 1942, he was attached to the Survey Training Centre RE (near Ruabon in north Wales) to attend a field survey course, followed by a course in air survey and cartography, from 22 December 1942 to 28 April 1943. The Survey Centre's main function was to train officers and men as military surveyors, who would then be able to act as reinforcements for existing survey units, and for the formation of new units. He was then detached to 14 Corps Field Survey (CFS) Company RE from 28 April to 17 July; returned to the Survey Training Centre RE from 18 July to 12 October; and detached again, to 523 CFS Company RE, before being posted to ISTD, at Oxford, on 8 November 1943. Jack's 'Officer's Record of Service' notes that he was detached briefly to B.A.S. Washington, USA from 19 October to 5 November 1944, and to active service in NW Europe with 21 Army Group in France, Belgium and Holland from 24 December 1944 to 19 January 1945. Soon after the Geological Section ISTD was formed, Jack became its officer commanding.

After the war Jack went to Nigeria, where as a consultant, his first client was Amalgamated Tin Mines of Nigeria (ATMN). There he took part in an aerial survey of the Jos Plateau, and made the acquaintance of the Western Nigerian goldfield. Then he was invited to be the official consultant to the ATMN Group, based in Nigeria. He published a preliminary description of the Nigerian lead-zinc field and undertook a mining survey in Cameroon. After being appointed Assistant General Manager with ATMN in 1953, he was promoted to General Manager in 1957. Whilst General Manager, he was appointed a 'special member' of Nigeria's Northern House of Assembly (Lagos Times, 4 September 1961) to represent the region's mining interests, and promoted Northern Nigeria as 'an awakening giant'. He served until retirement from Nigeria in September 1964.

Presentation copies of the farewell speeches that marked his resignation from the House were donated by the family to the Pitt Rivers Museum at Oxford in 2006, as part of the documentation that accompanied donation of two ceremonial fans. Also, with retirement imminent, in the Queen's Birthday Honours of 1964 he was appointed a Commander of the Most Excellent Order of the British Empire for his services to the mining industry in Nigeria.

Jack and his wife returned to England, to Tonbridge in Kent, before moving to the Channel Island of Jersey where he continued with some consultancy work after retirement, but died there on 20 March 1982.

With copy of Gazette pages, a newspaper cutting and other research.