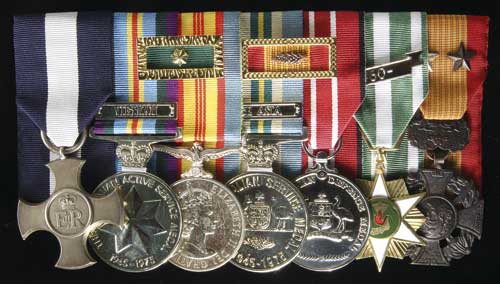 Also included are the following,
1) Copy of Qualification certificate that Thomas Francis Supple on 20th June 1967 did Carrier Qualify on the USS Lexington (CVS-16) in a T-28C type aircraft.
2) USN Naval Air Training Command copy of certificate for qualification as Naval Aviator to Sub Lieutenant Thomas F.Supple, R.A.N., 3 November 1967.
3) USN Helicopter Training Squadron Eight (HELTRARON EIGHT) copy of certificate for qualification as Helicopter Pilot to Sub Lieutenant Thomas F.Supple, R.A.N., 3 November 1967.
4) Two Republic of Vietnam original certificates in Vietnamese for Cross of Gallantry awards, both named to SBLT-02677-135th AVN CO (ASLT HEL) US Army, the first numbered 1255 19/7/1969 and the second numbered 1325 6/8/1969.
5) Investiture invitations to Government House 1st May 1970, one to Lieutenant T.F.Supple, D.S.C., R.A.N. and one to Mrs. C.M.Supple.
6) Unit Citation for Gallantry to Royal Australian Navy Helicopter Flight Vietnam dated June 2018, 2pp including actual citation in leather folder, and two official coloured programmes with printed list of recipients for the presentation event held at the Australian War Memorial.
7) A book titled, A Bloody Good Job Well Done, The History of The Royal Australian Navy Helicopter Flight Vietnam 1967-1971, editors Max Speedy & Bob Ray, 2008, hardcover with dust jacket, 437pp + photo plates, index and preface, Sub-Lieutenant Supple is mentioned on p199, 392-3, 410, 432, and is featured in 3 photo plates.
8) Copies of press articles featuring Sub Lieutenant Tom Supple and various photos.
9) Copy of a 39 page report of Defence Honours & Awards Appeals Tribunal into awards for two applicants in which Thomas Supple is mentioned several times.
10) Copy of a 52 page report of the Inquiry into Recognition for the RANHFV in 2017 in which Thomas Supple is mentioned and which resulted in the award of the Unit Citation for Gallantry.

On the 23 October 1968, Sub-Lieutenant Supple was the second pilot of a troopship helicopter shot down by enemy fire. On the 2 February 1969, while flying a gunship helicopter, captained by Sub-Lieutenant W.E.Symons, Royal Australian Navy, he was shot down again and forced to land in enemy held territory. He was evacuated by another helicopter just before the aircraft was over-run by the Viet Cong.

Sub-Lieutenant Supple has carried out a number of forced landings under extremely arduous conditions in a most professional manner without causing any further damage to aircraft or crew. One landing was executed in such a confined space that two aircraft could not occupy the area.

In combat, flying gunships, Sub-Lieutenant Supple has proved to be a competent and aggressive pilot. On the night of 18 April 1969, Sub-Lieutenant Supple was scrambled from Long Thanh airfield, where he was counter-mortar standby, to render assistance to a small Army of the Republic of Vietnam outpost which was actively engaged with an enemy unit about to be over-run. Sub-Lieutenant Supple, the leader of the fire team, was forced to make low passes on a predictable flight path to bring his fore to bear on the enemy which were in close contact with friendly forces and in close proximity to a village. Sub-Lieutenant Supple continued his attack, disregarding the heavy small arms and automatic weapons fire, for almost one hour until the enemy was forced to disperse. A search at first light revealed three machine guns, a number of rifles and five enemy bodies.

Sub-Lieutenant Supple, by his devotion to duty, professional flying, leadership and heroic actions, has acted in the highest traditions of the Royal Australian Navy.

US Air Medal: Lieutenant Supple is entitled to this award which was granted belatedly on 25 February 2002 to all members of the RAN Helicopter Flight Vietnam.
(Note: The medal that is issued unnamed is not in the above group because Tom Supple was unaware that he was entitled to it because it was such a late issue.)

Unit Citation for Gallantry: For acts of extraordinary gallantry in action in South Vietnam from October 1967 to June 1971.

The Flight was a unique unit and every member, regardless of mustering or category, either performed their duties with demonstrable gallantry or were used in roles for which they were not trained and still performed bravely. The administrative and maintenance staff were required to assist in the provision of base security in addition to their normal duties and almost all of the support personnel regularly volunteered to act as aircrew employed as door-gunners and Crew Chiefs. This was in addition to the extremely long maintenance hours required to support the tempo of operations conducted by the Flight. Over the course of the operations in Vietnam, the Flight accumulated a formidable record of operational flight hours and citations for individual gallantry. This has set it apart from other operational units.

While exposed to hostile fire and at great personal risk, aircrew flew on average 50 per cent more operational hours per month than any other Australian aircrew in comparable roles with other units. Aircrew were constantly engaged by the enemy, faced the danger of booby-trapped landing zones and frequently found themselves fired upon by friendly forces. The personnel who flew with the Flight arguably saw the most intense combat of any Royal Australian Navy personnel in the war. Despite the fact that none of the personnel had previous operational service and none had been under fire, they were courageous in battle, exhibited exceptional and extraordinary gallantry and did so with great skill and heroic dedication in executing a mission far removed from those for which they had been trained. Over the period of the Flight's operations in South Vietnam, five members of the unit died and 22 were wounded in action.

The extraordinary gallantry, dedication to duty and astonishing record of the Royal Australian Navy Helicopter Flight Vietnam conducting tasks far removed from the expectations of Naval service, has forever set it apart from other units. The extraordinary acts of gallantry and heroism consistently displayed by the personnel, combined with their loyal devotion to duty were in keeping with the finest traditions of the Royal Australian Navy and the Australian Defence Force.

Republic of Vietnam Cross of Gallantry with Palm Unit Citation: Awarded to all members of the RANHFV serving from 16 October 1967 to 8 June 1971.

The Royal Australian Navy Helicopter Flight Vietnam was formed on 14 July 1967 to be integrated with the United States Army 135th Assault Helicopter Company (AHC) flying Iroquois helicopters in both utility and gunship configurations. There were four contingents during the course of the war in Vietnam for a total of approximately 200 men and the first mission was flown on 3 November 1967. In an effort to boost morale a competition was run to design a new company crest and soon the unofficial badge with the motto 'Get The Bloody Job Done' came into existence. In June 1971 the unit ceased operations and soon after was disbanded. Lieutenant Tom Supple was a member of the Second Contingent.

In one newspaper it was reported as follows, 'Sub-Lieutenant Tom Supple, 22 of Bartley Crescent, Wayville (Sth Aust) was the pilot of one of two helicopters which went to the aid of the unit under attack from the Viet Cong, six miles south of the helicopter base, at Camp Bearcat, a few miles east of Saigon. About 15 minutes after a call for assistance, two Iroquois helicopters were strafing the enemy with well-aimed rockets, and mini-gun attacks. A few minutes later, the gunships terminated the action forcing the enemy to clear the area. In a dawn search, VC bodies, two machine guns, several rifles and four rocket launchers were found.'

On another occasion it was reported, 'The 702nd Viet Cong Guerilla Company has been wiped out due to the efforts of two Navy pilots, Sub-Lieutenants Tom Supple of Wayville, South Australia, and Rick Symons of Sans Souci, NSW. Late last month, while flying their helicopter gunships near My Tho, Province capital of the Mekong Delta, part of the 702nd was engaged by Symons and Supple, resulting in heavy enemy losses. Recently the remaining 28 of the Company attempted to set up a mortar and B40 rocket position, only half a mile from the capital, when they were spotted from the air. Within minutes Symons and Supple were airborne. Despite intensive machinegun fire their gunships zeroed in. Though close to dark they continued their attacks with rockets and mini-guns. By evening it was all over. The two pilots were credited with 16 enemy killed. Ground troops captured eight, the mortar, rocket launcher and eight weapons. The four unaccounted enemy surrendered next morning.'

In yet another news report from February 1969 it was stated, 'Two Australian naval pilots, one of them a South Australian, had a lucky escape when their US gunship helicopter crash-landed in Vietnam only yards from a heavily fortified enemy bunker. They managed to escape when another US gunship - again piloted by Australians - helped to pin down the Viet Cong with heavy machine-gun fire and then picked them up. The gunship, being flown by Sub-Lts. T.F.Supple, 22, of Bartley Crescent, Wayville, SA, and W.E.Symons, 21, of Sans Souci, NSW, was one of 14 helicopters flying in American troops in an assault. It was hit by a .50 calibre bullet which stopped the engine. Announcing details of the incident today, the Navy Department said the gunship crash-landed in Vinh Long Province only 20 yards from the occupied Viet Cong bunker. Immediately the gunship landed the Viet Cong opened fire and tried to rush it.

Two American gunners in the helicopter and another airborne gunship provided continuous fire at the bunker while the Australians landed the gunship. The Viet Cong made another attack on the gunship as the troops it was carrying were scrambling out. They were again kept at bay by one of its gunners with machine-gun fire. The troops and the Australian pilots scrambled out of the far side of the gunship and waded across a waist-deep canal. Other airborne gunships continued to direct heavy fire at the Viet Cong bunker while one of the gunships piloted by two other Australians landed to pick up the men. This gunship was piloted by Sub-Lt. M.A.Perrott, 28, of Hastings, Victoria and Acting Sub-Lt. R.J.Kyle, 20, of Southport, Queensland. It was the second time that Sub-Lt. Supple had been shot down during an assault.